What You NEED To Know About H&M Opening In NZ

Like the rest of the NZ media (and an array of celebutantes) I walked the red carpet, got my picture taken in front of the H&M monogram and clamoured inside. This was, of course, the opening of H&M New Zealand.

For me, it was both parts horrific and amazing.

Firstly, seeing a who’s who of the media circuit all glitzed up (I did too, cause hey, it’s fun) walking inside the two-story shop felt a bit like some LA style red carpet event. Then to get inside and be handed a shopping bag – yes, a shopping bag and being told we had free-reign to go shopping (a whole 24 hours before the general public).

Something felt a bit off by being asked to go shopping at a media event (shouldn’t someone be giving a speech or something?). But everyone did. Each till had a long line and the fitting rooms had even longer lines.

Looking around at the racks filled with pretty clothes, some of which looked very similar to the international runways of Fashion Week, I couldn’t help but recall standing with a designer friend a few days prior, asking if he was going to the opening. “No, I’m not, he replied, I’m against everything H&M stand for.” At the time, I thought that was interesting. “Should I be going to this?” I remember thinking. But I did. I looked through the racks. I even helped my friend pick a top.

Leaving the event later that night, and seeing the mall carpark scattered with fancy people holding H&M bags, walking to their cars;  I couldn’t help but wonder if I was bad for attending. Was this an issue I was supposed to pick a side for?

Which brings us back to a very hot topic of late: Fast Fashion.

If you’re not sure what that totally means, it’s basically when a huge chain store rolls out new collections and campaigns (seemingly weekly) at extremely low price-points. The pieces are very ‘on trend’ and usually made in China or of the like. It’s fast, it’s easy to access and it’s hella fun.

Here are some key facts you need to know about Fast Fashion:

1.The reason that so many high-end and locally made designers hate FF, is because it under-cuts their businesses. Using cheap labour and cheap fabrics means that the prices can usually stay super low. Meaning that people are more likely to buy that $40 cocktail dress, rather than spend $440 on a dress from a local or boutique designer.

2. There is A LOT of controversy surrounding Fast Fashion shops, especially H&M, for using overseas sweatshops that violate basic human rights. Like paying workers 50 cents an hour so jeggings can be sold for $10.00.

3. Buying Fast Fashion at even faster rates is really, really bad for the environment. Do you need 11 pairs of jeans? Probably not, but at that price, fuck it, I’ll just throw them out in 3 months or whatever. They’ll be perfect for what I’m wearing tonight. That attitude is creating such excessive ‘clothing’ trash that it’s heavily, HEAVILY  impacting the environment. Not to mention the waste these huge, corporate chain stores create before the customer is even involved.

That all sounds quite dim right? But before you jump on the protest wagon, and condemn H&M (not saying don’t do it – just saying be informed) consider these thoughts:

1.H&M is one of many brands/stores using Sweatshop workers.  Zara, Topshop, Forever 21 – pretty much anything that is a chain store is probably doing something pretty unethical somewhere down the line. I’m not at all saying “they all do it, leave H&M alone”, quite the contrary; the process in which H&M and all these shops use is a symptom of a greater issue. The issue being that society thinks it’s normal.

Which brings me to my second point.

2. Exploitative Sweatshop labour should NOT be a normal thing. I know that’s easy to say, and I know that due to globalisation, it’s a fricken tricky subject. However, companies should not be allowed to fly over to a poorer country than their own, go into a factory and tell them that they need to lower their prices or they will go somewhere else. Maybe the companies themselves should not ever have the option to ask for a price per piece that means workers get $1 per hour; just because they are in a poorer country. If the government of said country can’t police it, then the government of first world countries should make it illegal to sell these products. It might be an idealist concept, but the only way to kill a beast is by cutting it off at the head.

3. Don’t be super quick to judge people that shop there. Look, it sucks that these companies engage in this activity, and the public does need to be aware – but chances are you’re into something that’s unethical too. We all are. Are you condemning H&M on facebook via your Iphone? That shit was made in a Sweatshop too you know.  Also, not everyone can afford $150 jeans. It’s hard to see some shitty Kardashian in a $1000 outfit and wanting to look that glamourous, then walking by a chain store where you can look somewhat like that for $50. It’s really tempting, I’d say even unfair.

The notorious fire in the H&M factory in Bangladesh.

By now, you might be pulling your hair out and gasping “what the hell can I do? should I even go outside? how do I know what’s evil somewhere along the line of production and what’s not? Should I even be eating this??” It is enough to send you to a padded cell.

I suggest this: Unless you’re super wealthy and can eat, buy and poop organic, just do what you can. When it comes to fashion, aim to buy fewer pieces that are better quality. Instead of $100 on 5 things, that are all badly made and will be tacky in 2 weeks, get one thing you love that will last longer and everyone won’t have it. If you have a small budget go op-shopping! Chain stores are great for basics, but you don’t need to pile your closet with 500 of them to look chic.

And like I always say in basically everything I write, give your local boutiques some love.

We Styled The CHUCK TAYLOR ALL STAR 70 Canvas High Tops 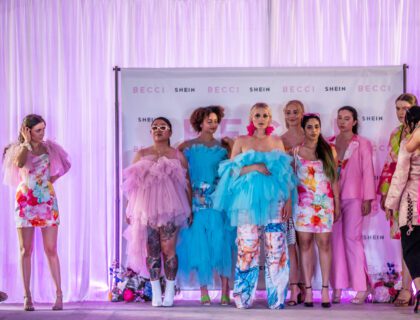